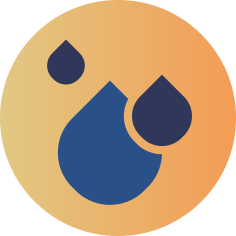 The triggers of heavy rainfall events are critical circulation patterns. The alert for possible consequences due to flash floods increases when comparable circulation patterns are forecast. Therefore, a better mapping and understanding of the cause (circulation pattern) and effect (rainfall pattern) relationships and their climate sensitivity is an essential basis for an optimal early detection, real-time monitoring and diagnostics of approaching rainfall areas in Jordan. WP 2 "Heavy rainfall hazards", therefore, develops the basis for an improved early warning of approaching rainfall areas in order to mitigate the danger of sudden flash floods.

Large-scale weather patterns are related to local precipitation patterns using available long-term climate data, operational satellite data and radar data as well as global reanalyses. The aim is to identify relevant drivers of heavy rainfall in Jordan in order to make an important contribution to the early detection of flash flood events that may cause damages.

We model how heavy rainfall events may continue to change in a changing climate using available regional climate ensembles as input for the hydrological modelling. The long-term evolution of climate risks from heavy rainfall in the Middle East is assessed by evaluating patterns in regional climate scenarios (e.g. Cordex). These results are integrated as a module in a developed demonstrator of an early warning system for flash floods (WP 6). This serves to better classify current and future heavy rainfall events.

The triggers of seasonal heavy rainfall events are critical circulation patterns. A prominent research direction for the better diagnosis of hydro-climatic extremes in mid-latitudes deals with the dynamic factors of hemispherical wind systems - the jet stream - and its changes due to climate change. The focus is on the relationship between the planetary and regional scale. Existing teleconnections between weather conditions in distant regions can be used for forecasting. Using objective methods of image recognition, recurring circulation patterns in regional atmospheric fields can be extracted and assigned a local criticality to heavy rainfall. A qualitative measure that can be used to assess immediate weather and medium-term climate risks.